Throughout the history of horror cinema, love has found a way of permeating through even the most hardcore, violent, or gory flicks. Doomed lovers try in vein to save each other, while others discover true love amidst a desperate fight for survival. Whatever it may be, our team of Grimoire of Horror writers have pooled together their favorite romances from horror movies to sway your heart on this Valentine’s Day! So come join Javiera, Mihail, Luke, and Aubry in this list of 14 horror movies perfect for Valentine’s Day!

Invasion of the Body Snatchers (1978)

When strange seeds drift to earth from space, mysterious pods begin to grow and invade San Francisco, California, where they replicate the residents into emotionless automatons one body at a time.

When the movie starts, Matthew (Donald Sutherland) and Elizabeth (Brooke Adams) are colleagues at the California Health Department as well as close friends. Yet, as the movie goes on and the madness ensues they need to rely on each other more and more, and long hidden feelings rise to the surface. The film does such an incredible job of building up to the moment that it is believable, and the tender frailty of love set amidst such a terrifying world serves to compound the horror.

You know a movie has worked hard to build romantic chemistry when it has the audience cheering on Winona to ditch Keanu Reeves for Gary Oldman. Sparks fly between Mina and Count Dracula, and as the sensual nature of the film amps up (can we say “hellooooo werewolf!”), the chemistry is so palpable that the only desirable outcome is for the two lovers to run off and live their vampy best lives. Dead has never been so sexy!

A young man in a personal tailspin flees from US to Italy, where he sparks up a romance with a woman harboring a dark, primordial secret.

This often overlooked horror is an exploration of love and attraction where the romance could be said to be more the central theme than the horror itself. Specifically, the film looks at Evan’s infatuation/love (however you read it) of Anna, and the movie does a great job of making her lovable. Spring tests the boundaries of what is reasonable to ask of someone you love, and has an ending open to interpretation that will leave you pondering the nature of romance for a long time to come.

A brilliant but eccentric scientist begins to transform into a giant man/fly hybrid after one of his experiments goes horribly wrong.

It is difficult to remember that David Cronenberg’s The Fly is also a love story. Despite all the body horror and falling off fingernails, Bundle and Ronnie’s ill-fated romance is heartbreaking to see fizzing out due to bizarre genetic mishaps. In the end, sometimes you have to let your loved one go, even if that means shooting him to end his suffering.

Five sisters in 19th century England must cope with the pressures to marry while protecting themselves from a growing population of zombies.

Romance and horror have something in common: both can accelerate our heartbeat. However, this movie, instead of offering just one taste of each genre, it mixes both up with hilarious results. While anyone can tell you that Mr. Darcy proposing to Lizzie is memorable, making a version where a zombie-killer version of her rejects him by kicking his butt is unforgettable. 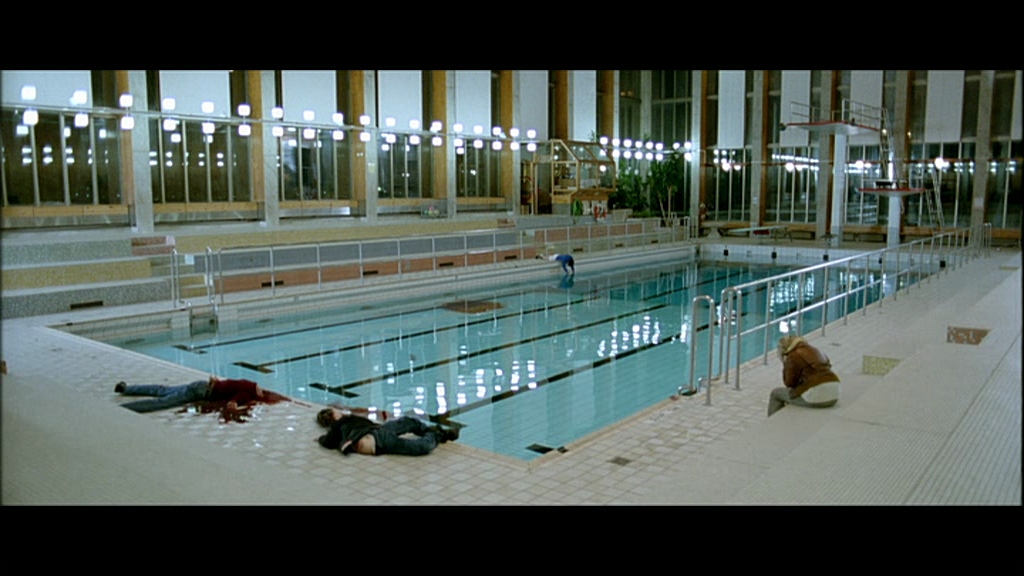 Oskar, an overlooked and bullied boy, finds love and revenge through Eli, a beautiful but peculiar girl.

Eli is a vampire, and Oscar is a lonely bullied boy, yet somehow their relationship works in an oddly sweet way. Morse code messages through the walls and hugs almost make you forget all the murder and blood-sucking that takes place. Still, they are a lovely couple, and you can tell that Eli loves Oscar. Nothing says “I love you” more than your special someone bloody killing your bullies during pool time.

In a post-apocalyptic wasteland in 1997, a comic book fan adopts the persona of his favourite hero to save his enthusiastic friend and fight a tyrannical overlord.

Turbo Kid‘s relentless gore and cartoonish violence serve as warm-up routine for its most romantic scene: protagonist The Kid and his crush Apple are forced to fight in the arena by the tyrannical Zeus, and they bathe in so much blood that even the Evil Dead remake pales by comparison. Right in the middle of all the mayhem, they lock eyes, shyly smile at each other, while the action takes a breather for just about three seconds. A great couple–both idealists in a desolate wasteland–Kid and Apple end up saving each other a lot, aided by an impressive arsenal and an ’80s synth soundtrack.

A confused religious girl tries to deny her feelings for a female friend who’s in love with her. This causes her suppressed subconsciously-controlled psychokinetic powers to reemerge with devastating results.

Joachim Trier’s Thelma sees the titular protagonist, having been raised in a strict Christian family, going to college and falling in love with Anja (singer-songwriter Okay Kaya). Thelma’s inner conflict manifests itself through violent seizures and psychokinetic powers. The most romantic scene occurs after the two had been experimenting with drugs at a party. The lovers embrace, kiss and explore every inch of each other’s bodies, and agony meets ecstasy as Thelma begins to hallucinate the Biblical Serpent coiling itself around her. Needless to say, it goes a lot worse from there.

Are We Not Cats focuses on a desperate young man, Eli, who meets a woman, Anya, while doing odd jobs in a backwater town. Anya confesses that she’s been feeling ill of late, and Eli admits he pulls his hair out all the time. “You have more hair than I do”, Anya casually admits, letting Eli into her ‘sensory room’, where an installation of gears, lights, bike wheels, pedals and drums creates a whirring psychedelic effect. The two stare at each other, get really close, and Anya pulls out some of Eli’s hair and makes him eat it, while eating some herself. The movie challenges viewers by getting them to root for a codependent couple with a possibly deadly compulsion.

The uneventful, aimless lives of a London electronics salesman and his layabout roommate are disrupted by the zombie apocalypse.

The whole of the film comes down to one central dilemma: Should Shaun grow, or comfortably stagnate? This abstract life choice is embodied by his romantic partner Liz and his best friend Ed, the metaphorical fight enacted in a struggle to survive a zombie uprising. All of this ZomRomCom action comes to a head in the final moments of their sanctuary becoming overrun. Shaun can only save Liz or Ed, and when his only choices are choose one or lose both he finally picks Liz. (Bonus points for Bromance this time of year, Shaun also gets to keep his now zombie BFF in the end too)

A young man’s mother is bitten by a Sumatran rat-monkey. She gets sick and dies, at which time she comes back to life, killing and eating dogs, nurses, friends, and neighbors.

A classic fantastical heroes journey resolves here, as the romance is a pivotal part of the finale. Not to mention a token favour from the love interest comes into play allowing the hero to save himself, save the damsel in distress, and save the day by slaying the monster! Of course, the full story is a little messier here. This is Peter Jackson’s notoriously gratuitous zombie comedy, and there’s some added layers of metaphor for emancipation from an overbearing mother that are best watched on an empty stomach…

The lives of a master sculptor and his young apprentice are changed forever when they meet an evil witch during a snow storm.

A promise must never be broken, only in true fairy tale style of course the hapless protagonist fails in this almost unleashing hell upon himself. Having survived an encounter with the monstrous Yuki Onna by promising to never speak of her, the Yokai followed the apprentice sculptor in the guise of a human. She becomes his muse, his wife, and the mother of his child; all of which hinged upon the caveat he must stay silent about The Snow Woman. So, obviously, things go wrong, repressed memories rush back, and the true form of the one he loves is revealed. What should come next is her part of the promise, she must kill him now that he has spoken her true name. Seeing their crying child cling to her husband, Yuki Onna spares him and flees. In the name of love she, too, breaks a promise, resolving the tale of The Snow Woman taking a husband with a bittersweet yet still happy ending.

Six months after the rage virus was inflicted on the population of Great Britain, the US Army helps to secure a small area of London for the survivors to repopulate and start again. But not everything goes according to plan.

Lovers separated in a dark tragedy eventually get reunited! After all they’ve been through, they kiss, which is then the inciting incident of the new Rage virus outbreak. This one kiss is the fulcrum of everything that follows, up to and including the implication the virus escapes the British Isles to the wider world. The story begins with Don being forced to abandon Alice, then their reconciliation fails to become the spark to reignite their romance. It instead reignited a Rage that may consume the world, with Alice herself being the first of the new wave of casualties to Don’s own hands.

When troubled musical prodigy Charlotte seeks out Elizabeth, the new star pupil of her former school, the encounter sends both musicians down a sinister path with shocking consequences.

The ever twisting plot of this film centers on Charlotte and Lizzy, two brilliant musicians who gravitate towards each other with a force that could crush suns. However, as the story begins to twist in on itself, revealing a multitude of hidden layers to the audience, this blossoming romance is tested to the max. It’s hard to talk about it in detail without giving away the twists (which are just so damn good), but I will say that the ending is perhaps one of the most disturbing, violent, and romantic visuals I could ever think of to end such a story.