Zombie-driven horror seems to be making a fierce comeback to the movie circuit lately. When one thinks about zombies, the words “apocalypse” and “chaos” instantly come to mind. Most well-executed zombie movies include hidden metaphors about our society and political landscape, as well as the effects of negative human behavior. The living undead that lack humanity, and their minds, are now consumed with but one savage objective.  Zombies have always been a metaphor for the deterioration of the human condition, manifested from their deepest fears. It makes sense that in most cases they are shown as the trigger for an apocalyptic event. 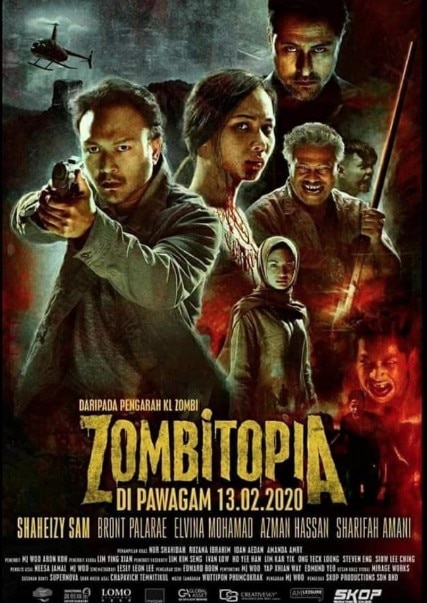 The main protagonist, Zidik (Shaheizy Sam), is a harsh man that has lost his faith in people due to being mistreated at an orphanage growing up. However, the memories of his childhood sweetheart, Zooey (Elvina Mohamad), still manage to keep him from becoming completely detached from society.

Fifteen years ago, Zidik lost his family due to the outbreak of a virus. It was eventually controlled by a vaccine that was created by Dr. Rahman (Bront Palarae). Yet, when the now-disgraced Doctor returns, a new strain of the virus emerges. While struggling to deal with his continual loss of loved ones, Zidik becomes an object of interest for Dr. Rahman.

Ming Jin Woo’s Zombitopia is packed with exciting action sequences, but the violence is not excessive. The plot is most engaging when you can see the message beyond the zombie outbreak. However, it tends to become a bit messy whenever the memories of Zidik’s childhood drama are dropped awkwardly in between key sequences.

Not all is executed skilfully, and the film visibly suffers from a lack of budget. The special effects contain many major errors that can be easily spotted if one’s attentive. In addition, there were many plot holes with the zombie mutations of two notable characters. Underdevelopment of the villainous role of Dr. Rahman reduces him to a mere caricature that was extremely underwhelming in the final act.

Despite all these faults, however, Zidik and Zooey’s onscreen chemistry is one of the more powerful and positive elements of the film. Reminiscent of 2013’s zombie romance, Warm Bodies, but with limited resources, the execution of the first half of Zombitopia is a moderate effort with great potential. The story just ultimately gets uneven and unbelievable.

The deeper that one delves into the story, the more you begin to realize that all logic needs to be checked at the door. Zombies and apocalyptic-based films are always a bit tricky to pull off without becoming too ridiculous or campy. Nevertheless, the audience doesn’t need to be spoon-fed to see the similarities of certain aspects when compared to the current Covid-19 pandemic, such as the fear and controversy surrounding the source of the virus, plus the lack in confidence in the vaccine. Finally, there are those always waiting in the wings to profit from chaotic situations such as this. If you pay attention, Zombitopia can give you that satisfaction, but don’t expect a solid landing!

Paranormal and True Crime Junkie, Lover of Horror with a true passion for writing in the hopes of becoming a published author one day.