Hello Spookies! Class is in session again. Today we are going to dapple in a Malaysian found footage horror movie called IRUL: Ghost Hotel. Full disclosure, I don’t know very much about Malaysian culture. So, I will have to do a lot of research with this film. But from first glance, this is a pretty standard found footage flick. 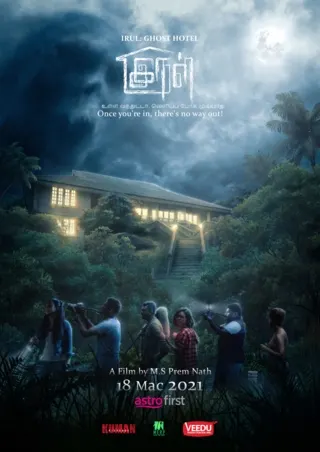 It begins with a couple sneaking off to a isolated and abandoned location. The male drags a protesting girlfriend through an abandoned house to the back yard. A beautiful sprawling city lights up the background and we discover that it has all been a set up to have a romantic anniversary treat together. As the couple are cutting into their anniversary cake a very human scream disrupts them. Passing it off as an animal they go back to their cake when a second scream startles them. They go to investigate (which is never a good idea) and they come across a very stereotypical girl in white standing at the edge of a clearing on the property. She is near a well like structure and the camera bounces away while exposition fills the viewer in that the girl has jumped.

It begins with a couple sneaking off to a isolated and abandoned location. The male drags a protesting girlfriend through an abandoned house to the back yard. A beautiful sprawling city lights up the background and we discover that it has all been a set up to have a romantic anniversary treat together. As the couple are cutting into their anniversary cake a very human scream disrupts them. Passing it off as an animal they go back to their cake when a second scream startles them. They go to investigate (which is never a good idea) and they come across a very stereotypical girl in white standing at the edge of a clearing on the property. She is near a well like structure and the camera bounces away while exposition fills the viewer in that the girl has jumped.

As the male character goes up to the well the woman begs him to leave and call the police. Her cries to leave are largely ignored and unfortunately for the young man a monstrous hand reaches out of the well and pulls him inside.

This opening scene is quite campy and fun. The only complaint I have is that the dialog feels very forced and this could be a product of translation not feeling like natural language, or it could be poor dialog writing on the part of the script. Because I don’t have the Malaysian language skillset, I only have the translation to go off, and I find it a bit uncomfortable, unnatural, and fake.

Not only that, the arm that reaches out of the well is comically yellow. This makes me wonder if this is on purpose because we are looking at a specific Malaysian entity, or maybe it was done to make the entity on the grounds of the abandoned hotel stand out against the near black and white scenery.

The next scene has a new character named Punitah is doing a documentary. She goes into a hospital looking for Nithya, the girlfriend from scene one. The man is still missing and Punitah is looking for him. She upsets Nithya which causes her to lash out. This prompts the nurses and doctors to come rushing in. Again, I’m not sure if it is bad dialog or what exactly, but the doctor scolds Punitah and says she has just discovered (in less than 2 minutes) that she is not really a lawyer as she had claimed to gain access to the patient and tells her to leave. This whole scene feels a bit rushed and inorganic. It feels like there is a bit of a plot hole that was left here. How did the doctor find this out in such a short amount of time? Surely, if it was this easy to disprove then she could have called out Punitah when she first arrived at the hospital. Something is missing in the story line at this point.

The movie references the Crag Hotel, which is a real place. The Crag Hotel was a private residence first occupied in 1845. In the 1850’s it was used as a sanatorium and at the turn of the century in 1896, it was converted into a hotel by Captain John W Kerr, and employee of the East India Company. This became a popular tourist destination for Europeans who lived in Penang Island and Georgetown. In 1905, it was taken over by some Armenian immigrants who improved the hotel and added 9 bungalows for tourists. The hotel survived WWI and WWII but was annexed by the Japanese Army. It lost popularity after the war and eventually closed in 1954.

After WWII, the hotel became The International School of Penang (Uplands) and opened in 1955. The school was moved in 1977 and the site abandoned. However, it was used in a couple of films. The abandoned buildings were used in the French Film with Catherine Deneuve Indochine (1992). It was used by the BBC in 2015-16 for the TV series Indian Summers. There are some really lovely photos of the property that can be found here.

While there are no substantial ghost stories directly related to the Crag Hotel, that doesn’t mean the movie doesn’t try or that locals to the area haven’t made up their own stories. During the scene where the film crew is researching the Crag Hotel they come across several websites that talk about how the location is haunted. They gather this information from the video of Punitah in the hospital questioning Nithya. They catch a moment on the video where Nithya is believed to have said the name of the location where the male character went missing.

As to be expected, our crew head up to the abandoned hotel looking for clues to find the missing man. They get run off and meet up with some ghost hunters who they plan to take with them to film the location when they return. But before that can happen, they have to go get shamanistic blessings. There is an entire scene where Punitah speaks to a shaman (I’m assuming he’s a shaman) who tells her that her quest will give her no answers. Interestingly, this seems to have been a mistake on their part because shortly, and I mean very shortly after Punitah leaves the shaman, a man – who they were supposed to contact about gaining access to the Crag Hotel shows up. He tells them it’s a bad idea and that they should not go there. They eventually get permission.

Overall the story does a really good job of setting up the site for a haunted hotel. They have back stories for particular buildings. It follows the standards of a ghost hunting movie. Go to location, set up the cameras, wait for the spooks. This is kind of where the story slows. They spend a lot of time setting up cameras. The scenery is beautiful though, so I’ll grant some forgiveness because it was quite pleasant to look at. One thing I appreciated about the long set up was the use of sound effects to build tension. I think this is often lost in modern films. The basic ambient sounds get enhanced so much, that you know to expect something. But in this film, they don’t use that. They use some creaking of wood to really set it up and nothing happens. It kind of leaves you in a heightened state of awareness.

One thing I think this movie suffers from is deciding how it wanted to execute it’s ghost hunt. The film has two directions it tries to go, one with the documentary film maker and another with the ghost hunters. It tries to mash them together and honestly, I got a bit lost. I’m honestly not sure why one of the parties is there. Even when the film attempts to give a reason why the documentary people and the ghost hunters are together, it really feels like a forced reason to smash a circle into a square hole. The pieces just do not fit.

As with any found footage film, when the spooks start they really start. There are some excellent scenes of possession, apparitions appearing, and technology malfunctioning. But the movie takes a sharp turn when the haunt starts to manifest in more malevolent ways. The characters are prevented from leaving the grounds and are being hunted by something that likes human flesh.

The last half  hour of the film plays out like most found footage films. More questions are left than are answered. And I think what happened was a world was left for us to explore. I’d like to see more installments in this series because I know I was still asking questions as things wrapped up. But the ending… I was not ready for the last 10-20 seconds. Didn’t even see it coming.

I spent some time after the film ended looking for links to folklore that would help me put the pieces together a little easier, but unlike my usual deep dives I did not find the kind of information I typically look for.

An interesting bit of history that really made this movie more enjoyable for me is that Malaysia has a rich history of ghost stories. Many of their ghosts are shaped by Hindu-Buddhist beliefs. Which is why they seem so similar to other Asian ghosts. But where we start to see some differences is in the Muslim influences on the Malaysian culture. The rise of the Islamic revival in Malaysia led to government suppression of of local ghost films because they were concerned that people would become superstitious.  However the access to foreign media, and Hollywood really made the ban futile. And with the release and popularity of Pontianak Harum Sundai Malam in 2004 there just wasn’t a way to control the boom of ghost stories that were about to be unleashed. Interestingly, in keeping with current religious trend, the ghosts are often portrayed as evil sprits, or even a type of djinn. This is a bit further removed than the traditional beliefs of ghosts in Malay culture. And in movies such as Irul: Ghost Hotel, where it is set up like a documentary, or in other media depicting ghost hunters, the ghosts/djinn are of the evil and malignant variety.

That is all I have for you today! Class dismissed!

IRUL: Ghost Hotel was released by Kuman Pictures, for more info on this release and other horror titles from Malaysia please check out their page here!

Hello spookies! My name is Liz, and I’m a bit of an academic. I’m here to bring you some academia with your horror. I have several degrees including English Literature with a focus on the horror genera, Japanese language, Japanese literature, and Japanese history. I used to live in Saitama prefecture, Sakura Ku, and attended Saitama University. I also went to Kobe Women’s College and studied Japanese food pathways. In high school I attended Shijonawate Gakkuen in Osaka. I’ve spent the last 15 years watching, critiquing and mostly enjoying Japanese horror media and am an active contributor to the Kwaidan Klub on Facebook. When I’m not working a COVID unit, I like to spend my time at anime conventions doing cultural panels and presentations. My most popular panel to date was a Tokyo Ghost Walk where I walked my panel attendess through some of the most haunted sites and neighborhoods in Tokyo that I got to haunt. So find your seats because class is in session! 🙂