“A crew of hardy road workers, led by a bickering father and son, must survive the night when they accidentally awaken an ancient Irish vampire.”

All horror legends begin with a kernel of truth; whether it is a collective trauma visited on a sleepy town long before written history, a very real and very violent man that time has been twisted into a monster, or an unexplained phenomenon from an author’s childhood (I’m looking at you Stephen King). For the sleepy Irish town of Six Mile Hill and the Boys of County Hell this is Abhartach, a real life Irish legend said to have inspired Bram Stoker’s Dracula. However, does this rowdy Irish film hold up to its hype or will this be a legend better forgotten? We asked our writers Aubry, Victor, and Adam at The Banshee to take a trip to Northern Ireland and report back with their findings in this group review of Boys From County Hell. 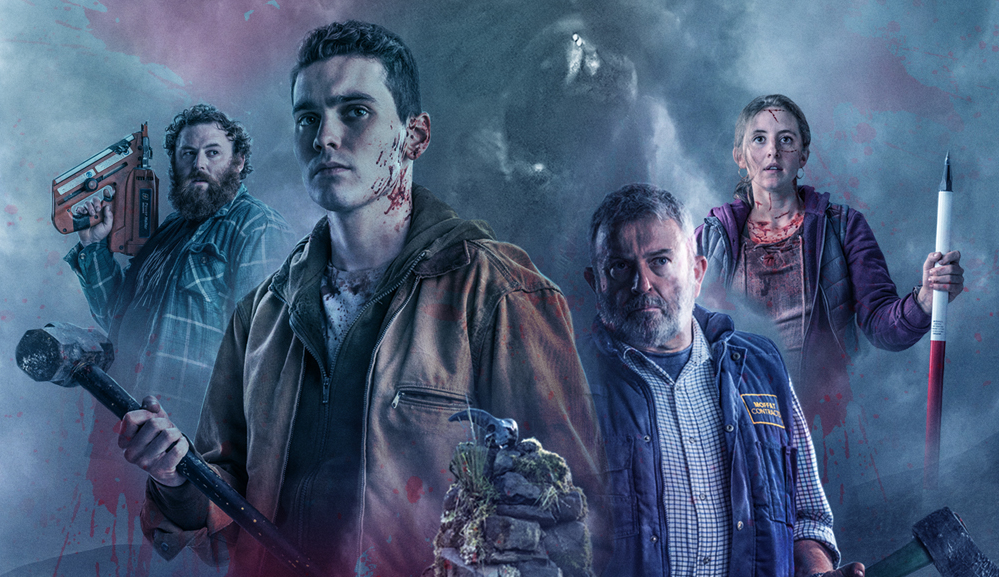 Victor:  Although it doesn’t do anything very special, the location is beautiful and interesting enough to make me want to know more about it and maybe visit it one day. In my personal opinion, the movie could be made better with a few animated sections to illustrate the history of the town and Abhartach. I will say, however, that this movie has the SWEETEST fucking guitar riff EVER.

Adam:  Serviceable? It is hard to really champion the overall direction and quality here but at the same time there is nothing notably bad. Essentially, “Boys From County Hell” is a perfectly competent indie horror film in execution and technical approach .A fact which is easy enough to gleam from the  trailer alone. It works well for what it is, though with a minor complaint of being a bit too dark overall.

Aubry:  The weird thing is that this movie manages to be beautifully shot, with rich colors and well-executed camerawork, but also forgettable. As a horror movie it failed to create those standout memorable moments that linger in your mind long after viewing; the body bag positioned in a high school hallway that suddenly raises in Nightmare on Elm Street, the “bum-bum” minimalist soundtrack of The Thing perfectly set to eerie moments of uncertainty, the creature grabbing the daughter mid-jump then disappearing into the water with her in tow in The Host, and so on. Even the creature Abhartach is a visual let down. Without those defining and ambitious moments the production is soulless, and that is what we have with Boys From County Hell: a well-executed but shallow and forgettable horror film.

Adam:  For me the strength of the production lies with its cast, wonderfully troubled human beings faced with their little town being wiped out by a new development set to destroy the one piece of history that draws in tourists. This conflict acts as an ideal way to explore the complex relationships between the denizens of the little sleepy town and give the protagonist an ideal path to redemption. The actual narrative of vampire on the loose, it is well done but does not offer anuthing nothing too unique.

Aubry:  The trailer sets expectations for a comedic romp akin to an Edgar Wright film, however the story is a surprisingly serious and nuanced look at small town life in rural Northern Ireland. The characters are well explored with very little awkward monologuing, and the community relationships feel real. I’m not sure I would have watched it knowing this ahead of time, but I’m glad I did.

Victor:  The characters were definitely the best part! They feel like real people with qualities and defects, as well as real friends who care for each other and have history together! You empathize with them to the point that a loss feels painful and the laughs feel genuine. The story does take some time to pick up, but it features some pretty high stakes once it does, as well as real conflict many historical towns go through everyday. Not the vampires, of course, but the whole road construction thing.

Aubry:  Vampire films are a dime a dozen and usually contain the well-trodden tropes, but this movie manages to acknowledge the genre while exploring a different avenue, namely the origin of such myths and mythical beings. I really enjoyed the idea of horror legends being taken to their folklore roots, and I loved the film’s look at how local lore influences small town life.

Adam:  Easily my two favorite things about the production was the cast and the Vampires method of preying on his victims. Smaller touches I enjoyed; well places jump scares that were fun and not cheap, subtle comedic tones, and a complementary yet complex love story thrown into the mix.

Victor:  The characters were definitely the best part, but I found the scenery, history of the town and, again, that sweet, sweet guitar riff to also be pretty damn good. The method good old vampire lord Abby uses to feed is also pretty gruesome in a fun way, but I admit I’d faint if I ever came through that town while that was happening. That’s what I get for having a phobia of blood.

What Didn’t Work for Us

Victor:  Abby’s design certainly isn’t the most interesting thing in the world, and I think such a powerful and old creature should at the very least have the ability to speak so he can deliver some cool dialogue. Again, I think some animated sections would have worked REALLY well in telling his story, but that’s just me.

Aubry:  The finale was all too brief and the tension resolved so quickly that I was left feeling short changed. Considering Abhartach is the driving force for the horror in the film, he was barely given any time on screen or explored as a character. Even when we do see him he is obscured in shadows in a way that gives the impression that they just didn’t have the effects budget to make him anything special. For a blood stealing baddie, he was a disappointment.

Adam:  I have to admit, I am a bit annoyed at the way Shudder marketed this one as a horror comedy, for the most part it really isn’t. Sometimes you do this to hide a turd, but in this case they seemed to have done a disservice to the film. Sadly, the approach seemed to be an attempt to appeal to this inherent idea that the Irish are quirky and any film with an Irish cast is instantly comedic? More of a side note, but it still kind of puts a bad spin on production. Beyond that, the film does not really do much to distinguish itself. Was it a fun ride? Certainly, but give it a few years and the majority of the plot will be lost and mixed up with others.

Adam:  I tend to hate jump scares, but this film had a few unorthodox ones that were well placed. The big baddie himself may have been slightly underwhelming, arguably, but I liked his way of drawing blood from a distance. Those ghastly visions of victims bleeding out the pools moving towards the monster was a wonderfully disturbing visual that I won’t soon forget.

Victor:  I’m also with Adam in this one! The ruby pools of blood slowly crawling towards Abby sure is a sight to see/make me faint on the spot. It’s like the ultimate AoE damage over time attack in an RPG, so you know the party is gonna have trouble with it. Besides that, the other vampires in the movie, although insistent, aren’t that scary.

Aubry:  I completely agree with Adam and Victor about the creature’s ability to draw blood from a distance. It lent a proximity horror to the film, whereby the monster could attack at any moment without putting himself in danger. It was a clever creep which I haven’t seen done quite as well in other movies.

The Etheria Film Festival, or Etheria Film Night, is an annual film festival to showcase the latest short films by female directors. The first Festival was founded in 2014 by…

Though the pandemic has seriously affected the way the world conducts business and we live our lives, filmmakers have been working to find a way to keep creating films in…

Synopsis: An aged mortician meets a young girl interested in working for him, as the two go about the duties of the job he relates the tragic stories of the deceased….

It’s hard to remember when the “women’s prison” subgenre was iconoclastic, given its popularity these days. But, before we had series like Orange is the New Black, Vis a Vis,…

Who does not like a little bloodshed in their Halloween flicks? Well, Gabriel Carrer & Reese Eveneshen certainly deliver the goods in For the Sake of the Vicious, a film…