­­­­­­­­I remember the first time I watched Hiroya Oku’s Gantz anime. Let’s set the scene: it was the early 00s and I would hang out with my friends after school to watch whichever anime one of us could get their hands on. Unfortunately, there was this girl I hated that sometimes went to these meetings. Let’s call her Natalie. To this day, I think Natalie felt a sick pleasure in making us feel uncomfortable by showing us series that she knew would make us recoil, such as the infamous puppy scenes in Elfen Lied and Midori.

Before we parted ways, she presented Gantz. The opening song slapped and the ending sequence was gorgeous. There was some gratuitous violence and fan service, but I could grant a pass to that since I enjoyed the action scenes and the survival mechanics. Still, since creepy Natalie introduced me to this show, I had always associated a bad vibe with it and never watched past the first two episodes.

Having finally finished my master’s degree, I decided to use my time wisely by giving Gantz another try, at least in its manga form. It was just as I expected; there was blood, gore, and unnecessarily uncomfortable fanservice. Still, under all that edge I could see the value and why it’s still so beloved among fans.

Gantz tells the story of Kei Kurono and Masaru Kato, two estranged friends who are hit by a subway train, while trying to save a homeless man. Instead of dying, at least in the conventional sense, they end up in a Tokyo apartment with a bunch of other people, and a mysterious black orb in the middle of the room, named Gantz. They soon learn that they cannot leave the apartment and that they are tasked to fight an alien target.

The first mission is bloody and dissipates any notion of this situation being a cruel prank or for reality TV. The game is on and they will be called back by Gantz to fight these creatures until they collect 100 points. Points are awarded according to their performance, and once 100 are reached, a player can opt out of the “game” with their memories erased, returning to a normal life.

While Kato is an idealist and wants everyone to return safe, Kurono’s morals are more questionable. Once just as bright-eyed as Kato, he is now a cynic high schooler who fluctuates between heroism and selfishness in each chapter. However, when aliens start to appear in clusters instead of occasionally, he and the rest of the Gantz teams around the world realize that something bigger and more dangerous is going on with our planet.

To say that Gantz can be problematic is an understatement. The violence is tasteless, the way women are treated is terrible at first, and the humor is at times gross. Be that as it may, like Kurono, Hiroya Oku starts to find value in Gantz and dares to add some heart to the story. This depth is what saves the manga and differentiates it from similar edgy death games likes Dokumushi.

As the plot progresses, we start to see that the Gantz game, as cruel it is, gives you the chance to be equally heroic. The suits given to the contestants enhance their strength and agility, so a small child, an old man, or even a panda can survive if they play their cards right and have some luck. No one is safe here, and some deaths are heart-wrenching, but you get to love these guys for trying.

Gantz is dark and bleak, but Oku knows that kindness is just as common as malice. He is not too jaded to avoid reminding us that, even among the chaos, love can survive. Even the aliens invading us can be compassionate. No matter how different they look, if they have enough cognitive functions, they can feel empathy too. This creates an interesting dynamic and balances a story that otherwise could have been a senseless gore-fest.

The first chapters can discourage a lot of readers. It is clear that Oku did not at first see the value of what he had and relied too much on boobies and blood. That’s not bad at all, but one could easily judge the series as being only that and nothing more. The initial tone does not match the rest of the manga. The story struggles with a disparate tone that may divide audiences: the ones who want just gore will get bored of the social commentary, while the ones who indeed want that deeper aspect will drop the story because it takes so long to get to it.

Some comments online complain about how ridiculous the aliens are, like the Tanaka one. While not scary in the conventional sense, the whimsical vibe they give adds more than it takes. Gantz wants to make you feel hopeless and small in the grand scheme of things. What makes you feel more insignificant than a cosmic force not even bothering to fight you, as an apparently unworthy opponent? Of course, later aliens are undeniably frightening, but the early ones are perhaps too perplexing for a first-time reader or one less adjusted to the absurdity of some manga.

I don’t regret coming back to Gantz after all these years. Being more mature, it was a greater experience. While it was senseless, imperfect, and Oku often lost his way many times, he still knows how to portray the complexities of the human race, while being highly entertaining. It is clear that this manga is not for everyone, but whatever objection you might have cannot negate the value that some find in it. In the end, Gantz is about how our apparent insignificancy does not diminish our value. Blood and gore are a plus, but when you take those things away, you still end up with a compelling, and sometimes profound, tale of what makes us human. 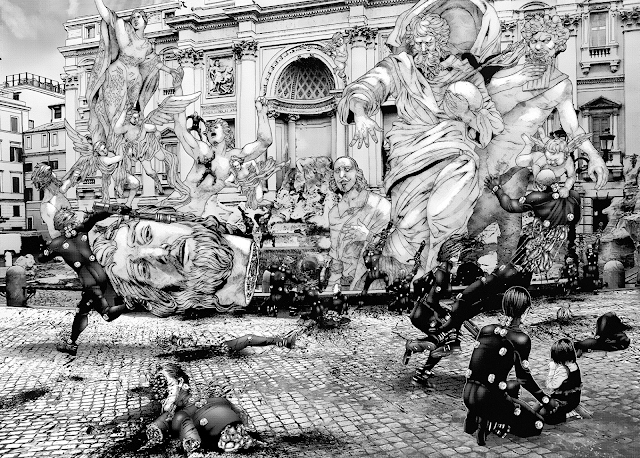